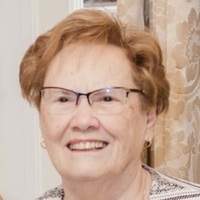 She professed faith in Christ and was a member of Lowell Avenue Baptist Church.

Audra was a retired employee of the Campbellsville School System, where she spent many years working in the cafeteria.  After retirement, she looked forward to her lunches with her former coworkers and friends.  She also loved spending time with her special friend, Brenda Bright.

She was preceded in death by a brother, Lewis Harmon.

VISITATION:  12:00 NOON UNTIL TIME FOR THE FUNERAL