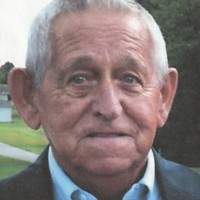 Bert Rhodes, Jr. of Campbellsville, son of the late Bert Rhodes, Sr. and Marie Helms Rhodes was born September 22, 1931 in Taylor County, Kentucky. He died at 4:45 P.M., Friday, February 14, 2020 in Louisville. Age: 88
He professed faith in Christ and was a member of Palestine Baptist Church.
He had also attended Meadowview Baptist Church with his second wife and had helped with church meals at both churches. He was a retired employee of Fruit of The Loom where he worked in the cutting room.
Bert enjoyed being outdoors as much as possible and was often seen sitting in his open garage waving at passers-by; he also enjoyed gardening and mowing when he was able. He loved being with family and friends and could always find someone with whom to strike up a conversation no matter where he was.
He united in marriage to Lorene Graham Rhodes March 31, 1956. She preceded him in death August 6, 2009.
He later united in marriage to Florence Mitchell Taylor Rhodes April 9, 2014. She preceded him in death October 8, 2018.
He is survived by two daughters and one son: Betty Harmon and significant other, Mark McFarland, Patricia Wheat and husband, Doug and David Rhodes and wife, Leslie of Campbellsville; six grandchildren and spouses: Jennie (Tony) Connor of Lexington, Amy (Sam) Watkins of Versailles, Benjamin (Brooke) Benningfield, Whitney (Ryan)Tungate, Rachel (Raphael) Cunha and Jennifer (Cody) Berry all of Campbellsville; nine great-grandchildren: Ty and Elly Connor, Bella and Luke Benningfield, Bradyn Rhodes, Lia Cox, Carson Tungate and Cameron and Kaysen Watkins; one brother, Bobby Rhodes and wife, Phyllis of Campbellsville; several nieces and nephews and many other relatives and friends.
He was also preceded in death by one granddaughter, Judy Benningfield, June 14, 2000 and two sisters and four brothers: Hilda Sublett, D.B. Rhodes, Barbara Cole, Shelly Rhodes, Edward Rhodes, and Don Rhodes.