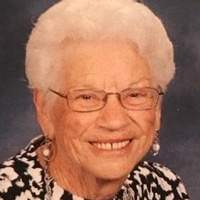 She professed faith in Christ and was a member of Green River Memorial Baptist Church.

Betty was a retired employee of Fruit of the Loom in Campbellsville. She loved cooking and working in her garden and she never let her sons run out of her delicious homemade biscuits which she always kept in the freezer. She was known to her grandchildren as the "best Grandma ever".

She was preceded in death by a son, Robert Allen Stearman and two brothers: Bill Thrasher and Charles Thrasher and a sister in infancy.