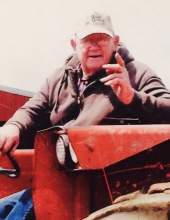 Bill Whitlow
Boyce Clinton "Bill" Whitlow of the Gabe Community of Green County, Kentucky, son of the late Willie Whitlow and Clevie Parker Whitlow, was born on Tuesday, October 6, 1931 in Greensburg and departed this life on Thursday, August 6, 2020 at his home in Greensburg. He was 88 years and 10 months of age.
He had made a profession of faith in Christ, was a member of the Summersville Church of the Nazarene, and was a lifelong farmer. He was also a Korean War Veteran having served in the United States Army.
He is survived by his wife of 68 years, Shirley Thompson Whitlow of Greensburg having united in marriage on December 21, 1951.
Other survivors include: one son and his significant other: Forrest Clinton Whitlow and Jill Peltzer of Kansas; a daughter and son-in-law: Kelli and Thomas Henderson of Gabe; a son-in-law: Philip Cox of Greensburg. three grandchildren and their spouses: Clint Henderson, Christina and Chris Smith all of Greensburg, Morgan and Jonathan Berkshire of Glencoe, KY; a brother: Dick Whitlow of Bowling Green; and a host of other relatives and friends.
Mr. Whitlow was also proceeded in death by his daughter: Paula Whitlow Cox on July 7, 2001; a grandson: Luke Henderson on September 26, 2015; two brothers and two sisters: Nora Whitlow, Lynn Hodges, Charles Whitlow, Bernard Whitlow.
..........................................................
The funeral services for Bill Whitlow will be conducted at 2:00 P.M., Central Time, Friday, August 7, 2020 at the Cowherd and Parrott Funeral Home with burial to follow in Green County Memorial Gardens. Bro. Jamie McCormack officiating.
Walk-through visitation is requested after 12:00 P.M. until time of the funeral service.
The family has asked that expressions of sympathy take the form of donations to the Gideon Bible Fund which can be made at the funeral home.
For online condolences log onto: www.cowherdandparrott.com or Facebook.
PALLBEARERS:
Thomas Henderson, Forrest Clinton Whitlow, Clint Henderson, Jonathan Berkshire, Chris Smith, Gene Vaughn, Philip Cox.