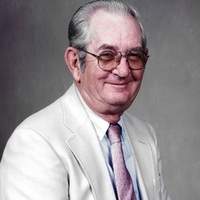 Clay Rogers of Campbellsville, son of the late Ernest Rogers and Mayme Gaines Rogers, was born April 2, 1926 in the Hatcher/Meadow Creek community of Green County, Kentucky.  He died at 6:11 A.M., Friday, June 11, 2021 in Campbellsville.   Age: 95

He professed faith in Christ and was a member of Millers Chapel United Methodist Church where he taught Sunday School and was the song leader for many years.  He had read the New Testament through over one hundred times in the last ten years and was a charter member of the United Methodist Men and also a Gideon.

He served his country honorably in the United States Army and was a veteran of World War II serving Japan and the Phillipines.

He had served on the Taylor County Farm Bureau Board of Directors for more than fifty-two years.

Clay was a retired farmer and dairy producer and had also worked for several years at Rogers’ Foodland.

He united in marriage to Christine Blankenship April 9, 1955 and she preceded him in death October 8, 2020.