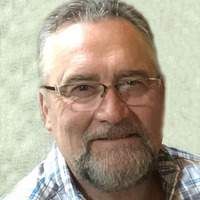 David F. Akridge of Campbellsville, son of Helen Johnson Akridge and the late Chester Frank Akridge was born March 10, 1951 in Larue County, Kentucky. He died at 3:38 A.M., Saturday May 30, 2020 in Bowling Green, Kentucky. Age: 69
David professed faith in Christ at about age 10 at Hodgenville Methodist Church and was a member of South Campbellsville Baptist Church where he was an active deacon.
He retired from GTE/Verizon after twenty seven years and was later employed as a bus driver for the Taylor County School System.
David enjoyed woodworking, hunting and spending time with family and friends.
He united in marriage to Cheryl Bishop December 5, 1970.
Besides his wife, Cheryl Akridge of Campbellsville he is survived by two daughters: Holly Akridge and wife, Patty Rosser of Bowling Green and Gretchen Lawson and husband, Adam of Hoagland, Indiana; two granddaughters: Emori Lawson and Elyn Lawson; his mother, Helen Akridge of Campbellsville; two brothers and three sisters: Paul Akridge and wife, Jackie and Annette Jefferson and husband, Tom of Campbellsville, Alfred Akridge and wife, Diane of Buffalo, Beti Turner of Rineyville and Sherry Enlow and husband, Paul of Rockmart, Georgia; several nieces and nephews and many other relatives and friends.
He was preceded in death by a brother-in-law, Al Turner.
_______________

DUE TO HEALTH AND SAFETY ISSUES, THE FAMILY REQUESTS FRIENDS AND COMMUNITY WHO WOULD LIKE TO PAY THEIR RESPECTS, MAY LINE THE SIDEWALKS AND STREETS NEAR THE FUNERAL HOME AND BROADWAY FOR THE PROCESSION AT APPROXIMATELY 1:30 P.M. ON WEDNESDAY.
ONLY IMMEDIATE FAMILY WILL BE PERMITTED TO LEAVE VEHICLES TO ATTEND THE GRAVESIDE SERVICE.