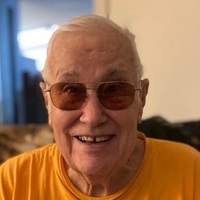 He professed faith in Christ and was of the Baptist faith.

David served his country honorably in the United States Army from 1967 to 1972.

David graduated from Taylor County High School.  He loved working on his parents’ farm where they raised chickens and milked Guernsey Dairy Cattle.  He was very active in the Future Farmers of America and shows his Guernsey cattle with his brother, Doug.  He first attended Campbellsville College after high school and later attended the University of Kentucky and received his BS in Agriculture in 1964.  David and his wife, Charlotte, started their career in 1965 and worked side by side for over fifty years.  They first had an H&R Block franchise in Cynthiana and then Harrodsburg.  They left H&R Block in 1976 to start the family business of O’Banion Tax Service and Accounting.  David and Charlotte also owned and operated O’Banion Farms, raising purebred swine, beef cattle and crops.

David was an avid fisherman and hunter.  He loved and supported his children, grandchildren and any youth that needed assistance, mentorship or friendship.  David loved life and was often heard remarking that he had lived a blessed life and he would do nothing different if he had it to do over again.  He truly loved being kind to all, always greeted others with a smile that would light up the room and set an exceptional example for his family.