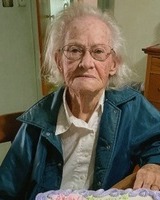 She professed faith in Christ and was a member of Campbellsville Baptist Church.

Delma was a dedicated wife who enjoyed taking care of others before herself, especially her husband, Willard. She was an excellent seamstress and enjoyed traveling with Willard on many mission trips and spreading the gospel to others.