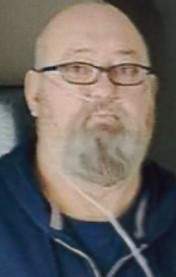 Douglas Edward “Doug” Cox, the son of Dollie Jean (Gabbert) Cox and the late Kermit Cox, was born April 4, 1956 in Taylor County, KY and departed this life on Sunday, March 13, 2022 in Campbellsville at his home. He was 65 years of age,

He had made a profession of faith in Christ and attended the Campbellsville Separate Baptist Church.

Before becoming disabled, he was an employee of former Crabtree’s Firestone in Campbellsville.

Doug enjoyed gardening, canning, and spending time with his grandkids and family.

Besides his father, he was preceded in death by three half-sisters: Patricia Lee, Linda Nunn and Wilma Sluder.

Survivors include his mother: Dollie Jean Cox of Campbellsville; a son and a daughter: Justin Edward Cox of Columbia and Rachael Mae Spurling and husband Donnie of Mannsville.

Also a brother: Carl Michael Cox of Campbellsville; a sister: Kathy Jean Pelly and husband Terry of Knifley; a half-sister: Cassie Brady of Lebanon; two grandchildren: Emily Grace and Bonnie Sue Spurling and a host of nieces, nephews including Ethan Pelly and Amanda Celis and other relatives and friends.

The funeral service for Douglas Edward “Doug” Cox will be Tuesday, March 15, 2022 at 1:00 P.M. in the chapel of the L.R. Petty Funeral Home with burial to follow in the Campbellsville Memorial Gardens.

Bro. Troy Grider and Bro. Matthew Lawhorn will be officiating.