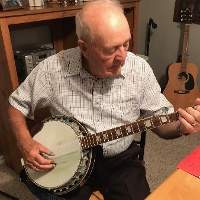 He professed faith in Christ and was a member of Campbellsville Baptist
Temple. Harland was a former employee of Fruit of the Loom.

April 15, 1974 Harland headed for Nashville, Tennessee to enroll in Auctioneer School. He spent two weeks training for different aspects of becoming an auctioneer like the chant of an auctioneer, which seemed to be natural for him.  The first year after completing his training, he served his apprenticeship under Finis Durrett, owner of Durrett Auction Co. from Greensburg, Kentucky. He auctioned at several stockyards including Leitchfield, Louisville, Bowling Green and several more across the state. In 1977 He joined Kessler Auction & Realty Company as a full time auctioneer he also served as auctioneer at Taylor County Stockyards.  After the closure of the Stockyards he continued to conduct auctions for Kessler Auction & Realty Company. If you attended one of the sales you would hear the chant of Harland Wright as he auctioneered and you would see his wife, Judy by his side as she clerked the sales. Harland also enjoyed playing his banjo and guitar for his family and friends.

He was also preceded in death by one son, Darrell Wright and two brothers: Wilburn Wright and Dennis Wright.

EXPRESSIONS OF SYMPATHY REQUESTED TO BE DONATIONS TO GIDEON BIBLES

AND MAY BE MADE AT PARROTT & RAMSEY FUNERAL HOME