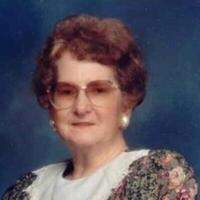 Helen Magdalene Johnson Akridge, daughter of the late Aubrey Johnson and Mary Campbell Johnson was born on November 29, 1924, in Taylor County, Kentucky, and died peacefully in her home in Campbellsville, Kentucky, on Friday, January 22, 2021, surrounded by loved ones.  She was 96.

Helen professed faith in Christ at an early age and lived her life in accordance to those beliefs.  She was a member of the First United Methodist Church in Campbellsville.

She married Chester F. Akridge on September 27, 1946, and he preceded her in death on November 20, 1992.  They enjoyed 46 years of marriage in which they had six children, thirteen grandchildren, fifteen great grandchildren, and two great-great grandchildren.  A homemaker all her life, Helen later retired from the Taylor County School System.  She had a love of farm living, rock collecting and traveling to various places around the world.  Gifted in quilting, embroidery, needlepoint, and sewing, she spent many hours creating beautiful items to share with family and friends.

Funeral arrangements are as follows:

Services will be held Tuesday, January 26, 2021, at 11:00 am EST at Parrott & Ramsey Funeral Home in Campbellsville, Kentucky.  Visitation will begin at 10:00 am EST, with Facebook Live accessibility available throughout the duration.

Graveside services will follow on Wednesday, January 27, 2021, at 11:00 am EST at the Memorial Garden’s Chapel of Peace.

In lieu of flowers, donations can be made to Hosparus Health of Green River and/or The Gideon’s International through Parrott & Ramsey.