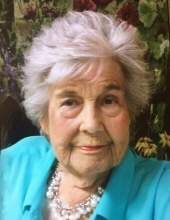 Mrs. Imogene Paxton Parson of Greensburg, Kentucky, daughter of the late Harley Richard Paxton and Mary Francis Wilkerson Wallace, was born on Saturday, April 27, 1929 in Green County and departed this life on Sunday, January 13, 2019 at the Golden Hill Rehab and Care Center. She was 89 years, 8 months, and 17 days of age.
She had made a profession of faith in Christ at an early age and was a faithful member of the Greensburg United Methodist Church. After her children were of school age, she was employed with the American Needlecraft and later with Clark Casual Furniture until retirement from public work. She was a devoted grandmother to her grandchildren and great-grandchildren.
She was preceded in death by her husband of 69 years, William Frank Parson recently on December 26, 2018 having united in marriage on June 18, 1949.
Survivors include a daughter and son-in-law: Connie and Mike Judd of Greensburg; a son and daughter-in-law: William "Billy" and Liz Parson of Greensburg; two grandchildren: Lindsay Parson Scarborough and her husband, Keith of Auburn, Kentucky, Andrew Parson and his wife, Jade of Greensburg; four great-grandchildren: Tayler Gage Judd of Greensburg, Carly Elizabeth Scarborough, Emma Ruth Scarborough, and Ellie Grace Scarborough all of Auburn; a special little boy: Braylen Chase Thompson of Greensburg; two brothers and a sister-in-law: Rex and Patsy Kay Paxton, and Russell Paxton all of Greensburg; and a host of other relatives and friends.
Mrs. Parson was also preceded in death by a grandson: Michael Scott Judd on December 20, 2003; a brother and a sister: Garland Paxton and Ermadine Paxton.
..........................................
The funeral services for Mrs. Imogene Paxton Parson will be conducted at 1:00 P.M., Central Time, Wednesday, January 16, 2019 at the Greensburg United Methodist Church with burial to follow in the Campbellsville Memorial Gardens. Bro. Dale Curry officiating.
Visitation is requested from 4:30 P.M. until 7 P.M., Central Time, Tuesday at the Cowherd and Parrott Funeral Home, Wednesday from 7 A.M. until 9 A.M., at the funeral home, and after 10:00 A.M., Wednesday at the Greensburg United Methodist Church until time of the funeral service.
Memorials are suggested to the Gideon Bible Fund or the Greensburg United Methodist Church Building Fund, which can be made at the funeral home or the church.
PALLBEARERS:
Billy Parson, Mike Judd, Andrew Parson,
Keith Scarborough, Randy Colvin, Danny Hawes