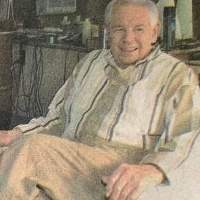 Johnnie Pennington of Mannsville, son of the late Vance Pennington and Helen Belton Pennington, was born April 7, 1938 in Casey County, Kentucky. He died at 9:15 A.M., Tuesday, August 6, 2019 in Campbellsville. Age: 81

He professed faith in Christ and was a member of Mannsville Christian Church.

Johnnie retired his comb and shears after over sixty years of telling stories and sharing laughs with all who sat in his chair. For more than fifty years, if you couldn’t find him in the barbershop, he could be found selling cars from his lot. Johnnie served on the school board for twenty-one years and was also a member of the Elkhorn Masonic Lodge #568 F&AM. His smile and wave will always be remembered in the Mannsville Community and his good natured personality will be missed.

He united in marriage to Dorothy Larimore in 1963.