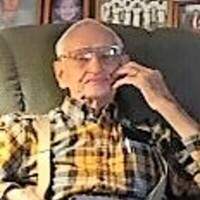 He professed faith in Christ and was a member of Bible Baptist Tabernacle.

He served his country honorably in the United States Army and was a veteran of the Korean conflict. He was a retired businessman in the carpet and tile industry most of his life as the owner and operator of Finn’s carpet. Murey served as a Gideon for over thirty years, he also served in prison ministry as assistant Chaplin at Marion Adjustment Center. Murey was a devout Christian and dedicated his life to the Lords work. Murey united in marriage to Geraline Murrell December 20, 1951 and she preceded him in death in June 26, 2016.

several nieces and nephews and many other relatives and friends.

EXPRESSIONS OF SYMPATHY ARE REQUESTED TO BE

DONATIONS TO GIDEON BIBLES AND

MAY BE MADE THROUGH PARROTT & RAMSEY FUNERAL HOME