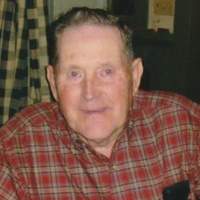 Omer Colvin of Campbellsville, son of the late Luke Colvin and Lou Mamie Benningfield Colvin, was born May 23, 1931 in Taylor County, Kentucky. He died at 10:20 A.M., Saturday, December 7, 2019 in Campbellsville. Age: 88
He professed faith in Christ at an early age and was a lifelong member of Spurlington United Methodist Church. He was a lifelong farmer, a former magistrate of the second district and a former deputy sheriff. Omer also was a veteran of the Korean Conflict (1953-1955) having served his country honorably in the United States Army.
He united in marriage to Florine Sharp March 10, 1956 and she preceded him in death May 27, 2016.
He is survived by one son and two daughters: Lynn Colvin and wife, Glenda, Diane Cave and husband, Jimmy and Joyce Pelly and husband, Mike all of Campbellsville; six grandchildren: Amy Burton and husband, Mike, Leanna Cundiff and husband, Shawn, Kelly Wright and husband, Michael and Hunter Pelly all of Campbellsville, Brittany Weiner and husband, Dan of Arizona and Courtney Pelly and fiancée, Cam Downs of Bardstown; six great-grandchildren: Chase Burton, Kaden Wright, Reese Burton, Evan Cundiff, Aubrey Wright and Ainsley Wright all of Campbellsville; two brothers: Clarence Colvin of Campbellsville and Milton Colvin of Horse Cave; several nieces and nephews, and special friends at Bluegrass Way Assisted Living.
Omer was also preceded in death by one brother and one sister: Gilbert Colvin and Flossie Campbell.