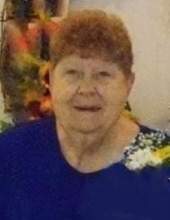 Patricia Ann Sidebottom Madson of Campbellsville, Kentucky, daughter of the late Creed Sidebottom and Irene A. Wolfe Sidebottom, was born on Wednesday, January 3, 1935 in Harmon, Illinois and departed this life on Tuesday, February 18, 2020 at Baptist Health Hospital in Louisville. She was 85 years, one month and 16 days of age.
She had made a profession of faith in Christ and was a member of the Hogard's Chapel United Methodist Church. She was also a retired Registered Nurse, having worked for many years with Jane Todd Crawford Hospital in Greensburg.
She united in marriage to Leslie Laverne Madson on August 30, 1959 who preceded her in death on March 21, 2011.
Survivors include a daughter and son-in-law: Colleen and Brad Miles of Adair County; two sons: Kevin Madson of West Virginia, Joseph Madson of Campbellsville; an adopted son: Ricky Eaton of West Virginia; daughters-in-law: Misty Madson of Campbellsville, and Tami Madson Bulle of Glasgow; six grandchildren: Michelle Shelton of Columbia, Gregory Swierczek of Campbellsville, Nick Swayne, Kaila Madson both of Glasgow, Sarah Madson, Johnathan Madson both of Campbellsville; eight great-grandchildren; sister-in-law and brother-in-law: Charles and Letha Baldwin of Tennessee; and a host of other relatives and friends.
Mrs. Madson was also preceded in death by a son: Karl Madson; and a brother: Steven Sidebottom.
...................................................
The funeral services for Patricia Ann Sidebottom Madson will be conducted at 11:00 A.M., Central Time, Friday, February 21, 2020 at the Cowherd and Parrott Funeral Home with burial to follow in the Campbellsville Memorial Gardens. Bro. Monti Fugate officiating.
Visitation is requested from 5 P.M. until 7 P.M., Central Time Thursday at the Cowherd and Parrott Funeral Home and after 7 A.M., Friday until time of the funeral service.
The family has asked that expressions of sympathy take the form of donations to the Gideon Bible Fund, which can be made at the funeral home.
For online condolences log onto: www.cowherdandparrott.com or Facebook.
PALLBEARERS:
Kevin Madson, Ricky Eaton, Paul Benskin,
Brad Miles, Keith Tucker, Bobby Fisher