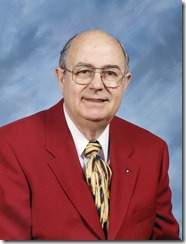 Sidney O. Williams, 85, Glasgow, died Sunday, April 14, 2019, at his residence. A native of Boone County, he was the son of the late Alvin H. Williams and Irene Hundley Williams Wash.

Sidney retired from being area circulation manager for the Courier-Journal with over 30 years of service. He and his wife Rose were co-owners of the Carpet Barn for approximately 38 years. He had served as music director of the Glasgow Bible Church and earlier at Trinity Church of the Nazarene. He loved to sing and had been a member of numerous gospel music groups. He was also a devoted member of Gideons International.

In addition to his parents, he was preceded in death by his wife Rose Ann Campbell Williams; two daughters: Rebecca Williams and Jeannie Williams; and one brother Wesley Wash.

Funeral services will be held 11:00 a.m. Wednesday at the Hatcher & Saddler Funeral Home. Interment will be in the Campbellsville Memorial Gardens at 2:30 p.m. EDT. Visitation will be after 3 pm Tuesday at the funeral home. Alternate expressions of sympathy are suggested to Gideons International.