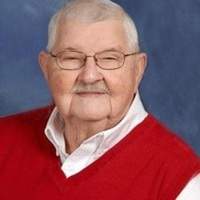 Silas “Buddy” Harris of Campbellsville was born December 29, 1934, in Taylor County, Kentucky.  He was the son of the late Silas Harris, Sr. and Ermine Nelson Harris. He departed this life at 5:22 P.M., Wednesday, November 20, 2019 at Jewish Hospital in Louisville at the age of 84.

Buddy professed faith in Christ and was a member of Beech Grove Baptist Church. He was a previous member of Campbellsville Baptist Church, where he served as a deacon and worked in the preschool ministry. He had also been an active member of the Emmaus Community.

He was a retired employee of Kentucky Utilities Company.

Buddy united in marriage to Mildred Sue Richerson February 17, 1957 and she preceded him in death March 23, 2016. He was a devoted husband and enjoyed spending time with her and their many friends. He was also a loving father and a proud Pappaw to his grandchildren and great-grandchildren, who were a delight to him.

Buddy was also preceded in death by a brother, James Harris.