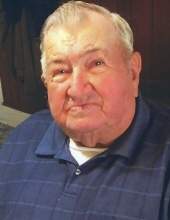 Winford Lewis Beams of Greensburg, Kentucky, son of the late Woodford Lewis Wood Beams and Florence McCubbin Beams, was born on Wednesday, April 5, 1933 in Green County, Kentucky and departed this life on Thursday, May 13, 2021 at the Taylor Regional Hospital. He was 88 years, one months, and eight days of age.
He had made a profession of faith in Christ, attended South Summersville Baptist Church, and was a farmer.
He was preceded in death by his wife: Ruby Agnes Walker Beams on October 15, 2006 having united in marriage on December 29, 1951.
Survivors include three sons and a daughter-in-law: Harold Beams, William Beams, and Randall and Diane Beams all of Greensburg; seven grandchildren: Bryan Scott Montgomery, Timothy Daniel Montgomery, Tiffany Lynn Beams, Samuel Dalton Beams, Nathaniel Austin Beams, Tristen Lee Beams, and Joslyn Rain Beams; eight great-grandchildren; a brother and sister-in-law: Garnett and Betty Beams of Greensburg; and a host of other relatives and friends.
Mr. Beams was also preceded in death by a daughter: Brenda Davis; and two sisters: Mary Lois Coakley and Clarola Arnett.
……………………………….
The funeral services for Winford Lewis Beams will be conducted at 12:00 Noon, Central Time, Monday, May 17, 2021 at the Cowherd and Parrott Funeral Home with burial to follow in the Campbellsville Memorial Gardens. Bro. James Walker officiating.
Visitation is requested from 4 P.M. until 8 P.M., Central Time, Sunday at the Cowherd and Parrott Funeral Home and after 7 A.M., Monday until time of the funeral service.
The family has requested that the form of donations be made to the Gideon Bible Fund, which can be made at the funeral home.
PALLBEARERS:
Alex Montgomery, Andrew Montgomery, Timmy Montgomery, Bryan Scott Montgomery,
Nathaniel Austin Beams, and Samuel Dalton Beams
HONORARY PALLBEARERS:
H.L. Wright, Jim Curry, Arthur Chaudoin, Tommy Amos, and Joe Beams