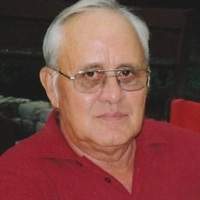 Winfred Sprowles of Campbellsville, son of the late Claude Sprowles and Velma Martin Sprowles, was born November 13, 1936 in Taylor County, Kentucky. He died at 8:41 P.M., Wednesday, March 4, 2020 in Campbellsville. Age: 83
He professed faith in Christ and was a member of Mt. Gilboa Baptist Church.
Winfred was a retired employee of Fruit of the Loom in Campbellsville after forty-two years of service and was also a farmer.
He united in marriage to Gertrude Hunt January 16, 1954.
Winfred liked to fish and was an animal lover. He loved working in the garden and always grew the best tomatoes and watermelons, which all his neighbors enjoyed.
Besides his wife, Gertrude Hunt Sprowles of Campbellsville, he is survived by one daughter and son-in-law, Rhonda Worley and husband, Bill of Louisville; special nephew, Keith Sprowles and wife, Donna of Campbellsville and many other relatives and friends.
He was also preceded in death by a brother, Russell Sprowles.